Do to circumstances beyond my control, the Newer Gods blog will be on hiatus for the summer of 2019. Hopefully, we will return in the fall ready to deliver more classic New Gods stories and reviews.

We leave you with a Bill Sienkiewicz Darkseid to keep you company in the time being. 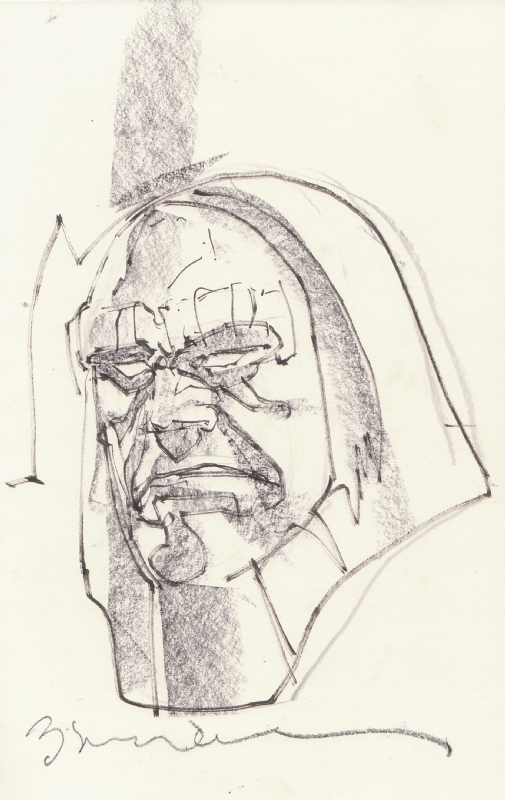 With this issue, the Great Darkness Saga really kicks into gear. Paul Levitz, Keith Giffen and Larry Mahlstedt kick things off with the "And the servant shall be a sign..."

Our story kicks off with a team heading to the Museum of the Mystic Arts to investigate a break-in. Superboy, Wildfire, Phantom Girl, Cosmic Boy and the new Invisible Kid. The head of the museum (who looks exactly like Doctor Strange would if he stuck his finger in a light socket) shows off the object that was offsite when the attack happened, a wand made of "mentachem" which possesses the ability to control elements in their natural state. But the curator doesn't finish detailing the item as the sky grows dark and a rock-like monster smashes through the wall.

In the last installment I talked about the Great Darkness Saga not really being written as if it was a multi-part storyline planned well ahead of time. It's just another event that overcomes the lives of the Legion. This can be clearly seen in Legion of Super-Heroes 288 which did not pick up at all the plot threads from the previous issue. This issue, again by Paul Levitz, Keith Giffen and now inker Bruce Patterson, only features the barest appearance of our not-so-mysterious villain.

In fact, it's all covered in less than one page, the one you see below.

It's little more than a call to action from our villain, a summoning of servant creatures that will soon play the foil for our team. Yet it is a call of action that will bring the deadliest threat the Legion ever faced at this point.

But that's a subject for future installments! Enjoy this look at early Giffen art and enjoy the foreboding presented by our lurking villain. We'll see everyone back here in a week for a slightly meatier next installment.

After the events of the inter-company crossover, it seemed as if the New Gods would return to hibernation once more. With Darkseid defeated and part of the Source Wall, little seemed left to be said. Yet as it turned out, only a few months would pass before the characters returned. And they would return a thousand years in the future!

It's strange to look at The Great Darkness Saga now and see it as part of its time. It seems like the conclusion of a grand epic, yet it actually kicked off the run of Paul Levitz and Keith Giffen as a team on the book that made both famous (or infamous depending on your viewpoint.) At this point, the Legion rarely interacted with the regular DCU outside Superboy appearances, so this level of connectivity with DC history was decidedly out of the ordinary. And it wasn't really that much of a saga either. Levitz came into the series with his Levitz Paradigm already at least in development. So even as the bigger threat loomed, the Legion still had plenty of other stories revolving around them.

The events of the story actually kick off in Legion of Super-Heroes 287, four issues into Levitz's run and the first full issue to be drawn by Keith Giffen, here with inks by Larry Mahlstedt. (Fun fact: Adam Kubert was serving as a DC letterer at this time, years before he would breakout as an artist in his own right.)

Our story is actually the back-up, billed as the first solo adventure of Mon-El and Shadow Lass. The two have been assigned to investigate a derelict, drifting world. Probes have failed to arrive at the world and almost as soon as the heroes arrive, they come under attack by a series of defenses. The tanks and weapons are powerful enough to give Mon-El a run for his money. Ultimately, it's Shadow Lass' darkness field that stops the ongoing attack drones.

But the pair don't get more of a chance to investigate as their Legion signal devices summon them.  Somewhere deep inside the world something awakens from hundreds of years of slumber, a figure frame d all in black. He is ready to conquer once more.

Mon-El and Shadow Lass fly off to answer a call from Karate Kid and Princess Projectra. The pair are thankful to leave the dark world, but already plan to return with a greater number of allies, even if the fact that only the shadows stopped the defenses in their tracks.

Back on the world, the newly awakened shadowy form of Darkseid watches and listens. He simply has one line as the heroes leave: "Worship the darkness fools, until the day it comes to you!"

If this sounds like a simple and fairly generic Legion of Super-Heroes tale, you shouldn't be surprised. It's pretty much just a simple and generic LOSH tale. But like so many Levitz tales, the greater threat starts out as little more than a quiet whisper in the first few pages of their tale.

Apokolips looms for the Legion now, as a great universal villain will soon threaten all of reality. But that is a tale for another issue and another installment of Newer Gods! See you then!
at March 28, 2019 No comments: