The team of Englehart and Rogers went out with a bang in a freeform final issue of their short run, but that didn't bring this run of Mister Miracle to an end. The team of writer Steve Gerber, artist Michael Golden and inker Joe Giella bring the world their first installment, "As Ethos is my judge...?"

After last issue, Mister Miracle was hurled into the abyss of outer space by Darkseid. (We didn't see that in the book itself, but it's covered in explanatory text on page one.) He thinks he might be on his way to his own death, reminiscing of Oberon and Big Barda. Instead he lands on a strange human-size chessboard floating in the depths of space. A red-cloaked figure welcomes him to this world or as he says, "to an oasis in the vast wasteland between worlds! Welcome to the domain of Ethos!"

He quickly realizes the strange figure's voice resembles that of Mother Box, but as he's coiled around by two snakes that turn to chains to bind him, the figure identifies himself as Ethos. Ethos is an androgynous being that serves neither Apokolips nor New Genesis.  He states a simple purpose for Scott's arrival on this plain, "to break the constraints of your own preconceptions!"

Gerber continues with another page of metaphysical mumbo jumbo that can basically be distilled into "you can't be the messiah you wish to be unless you know yourself." He ascends stairs off of the great chessboard, his chains fall away, and...

He comes to next to Oberon flying in a speeder car. He barely recovers in time to dodge around several other vehicles in an insane death race. But this death race is being ran by the gods of New Genesis and Apokolips alike. He quickly ends up in a dead heat with Darkseid himself, driving a forties era car. Darkseid throws a dagger and strikes Oberon, but Oberon insists Scott finish the race.

Mister Miracle refuses to continue the race though and shoots his speeder up into the sky instead. The speeder explodes and sends Oberon and Mister Miracle falling as the crowds cheer for him. If this all seems a bit existential, well...

It turns out Scott is still with Ethos and its all been a vision. Ethos questions Mister Miracle's sense of purpose before sending him on another quest. He quickly arrives on a jungle world, where Orion attacks him! He's beat up by Orion, even as he realizes that tiny humans are scurrying around their feet. Big Barda attacks him as well, but Mister Miracle refuses to raise his hand against her again.

He touches Mother Box in this plane and shrinks to insect size. But Darkseid arrives to squash him like a bug. But he grows suddenly in side and knocks the off-model Darkseid for a loop. (Golden apparently thought that was a cloak around his head.)

Darkseid falls on the tiny human village though, killing the humans.

He returns to Ethos as he laments the lives lost. Here Ethos reveals why his plan for saviordom didn't work, for as a product of Apokolips and New Genesis, he's not truly comfortable in either. His comfort with humans comes for a simple reason: he is not a god of New Genesis, but a human.

His chains vanish as his admittance to his true nature has broken the chains his supposed godhood brought to him. He walks away, disappearing from Ethos as the next issue promises "Messiah, Save Thyself!"

This issue seems designed to call to a halt a lot of Englehart's ideas for this run of Mister Miracle. I'm a big fan of Gerber on Howard the Duck and Man-Thing, where he's known to get weird and out there. But the existential nonsense of this book often feels glued together after one too many recreation substance. Nor does it really progress the plot at all. Instead it seeks to change the focus for Scott himself, but whether that will stick as the next issues come about remains to be seen.

Whew! That was a wild one. Be ready next time as we fly back towards the only ongoing narrative we have left in the late seventies era.
at September 26, 2018 No comments:

As 1977 gave way to 1978, it seemed clear that the revival of the New Gods was already wheezing towards an end. Return of the New Gods seemed to publish less and less issues, even as Gerry Conway's regular writing assignments seemed to increase. Super-Team Family was a team up title at DC, and once again the New Gods arrive just in time to end a series. I surmise this arrival was designed to try to ignite interest as sales dwindled and the DC Implosion loomed, but that's just my conjecture. Let's get to the book itself.

It starts off amazingly well with a wonderful Jose Luis Garcia-Lopez (praise be his name) cover. The interiors open with Flash and Lightray speeding around a planet, but as we move to the two page splash we find out this isn't a planet at all: it's the ever expanding body of Orion! We also get our creator credits with Gerry Conway on the story, Arvell Jones on pencils and the great Romeo Tanghal inking.

Metron arrives, but neither the New Gods or the human they've recruited for his scientific knowledge understand the sudden change in the catatonic Orion. Flash uses his speed powers to attune to the frequency of the Mother Box providing an atmosphere around Orion and himself as he seeks to find answers. With it, he finds an entry point into the giant Orion, but stumbles onto "a world of wires, circuitry, and crystals!" He seeks to use his speed powers to follow the processes in the giant circuit, in search of answers. Why Flash doesn't question why the giant god seems to be made of machinery can only be explained by "it's comics."

Behind a Marshall Rogers cover, this issue starts with a dramatic statement by Scott Free: "I must kill Darkseid, Oberon! ...And the sooner, the better!" 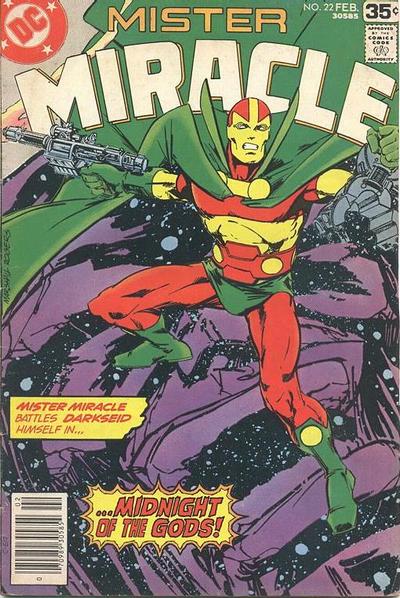 "Midnight of the Gods" is brought to us once again by the Englehart / Rogers team, together in this book for the final time. Englehart uses his John Harkness alias here, a name he's turned to a few times when he's unhappy with the direction he's forced to take on a book he's leaving. This doesn't appear to be an editorial issue though as often was the case later when he used the Harkness name. Englehart explains on his website: "Because I didn't think it measured up to my previous issues, I put my pseudonym, John Harkness, on it... Here, it meant only that I didn't think I met my own standard."

He also explains that he dashed this issue out in one day as he prepared to leave the country. The rush nature also might be apparent from the presence of two inkers over Rogers: Rick Bryant and John Fuller.

Moving back to our story, Oberon meets Free's declaration with humor. He jokes that he must mean they need some rest, as they're the only two men on all of Apokolips fighting the good fight. But before their conversation can finish, they're attacked by soldiers dressed somewhere between Imperial Stormtroopers and 80s era Brainiac cosplayers. He slips free of their grasps though and grabs one of their guns. By the time they realize he escaped, he's blasting them with one of their own weapons!

015. Lonar versus the misdrawn demons of Apokolips! (Return of the New Gods 15)

After a month long digression into the world of Mister Miracle we finally continue the Return of the New Gods with issue 15. Gerry Conway is back on writing duties, while Don Newton takes a break to allow regular cover artist Rich Buckler to take the interiors with the always impressive Bob McLeod on inks.

Buckler doesn't have quite the same chops as Newton, but his work features an interesting mix of Kirby and Neal Adams that works quite well for the gods of New Genesis. His art shines as we open the story with a New God we rarely saw in Kirby's own work: Lonar.

If you remember from way back in issue 12 (Newer Gods 008), Lonar was the chosen protector for Nomak, the Eskimo that held a part of the Anti-Life Equation locked in his mind.